Entrepreneur Magazine: Getting More Out of Your Episodes

Learn why Jason thinks podcasting is valuable for brands, how they build a dedicated fanbase and the advantages of producing multi-platform content. 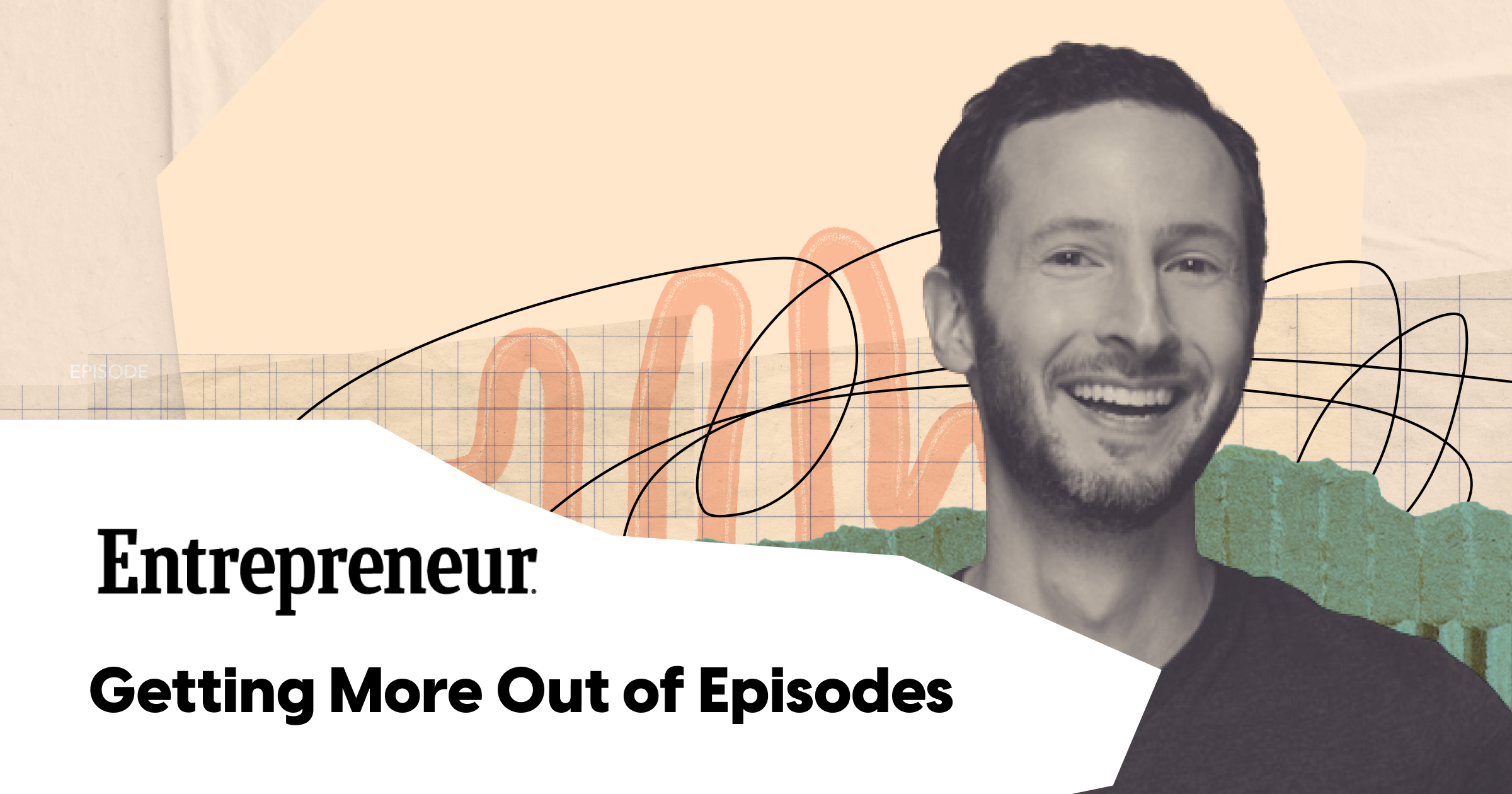 Jason Feifer is the Editor-in-Chief of Entrepreneur magazine, which alone keeps him busy enough. But on top of that, he also hosts three podcasts: Problem Solvers (an Entrepreneur podcast), Pessimists Archive, and Hush Money.

“I don't have time to just hop on the phone and chit chat with people … People will email me and say, Hey, can I get 15 minutes of your time? No, the answer is no,” Jason says.

But podcasts have actually given Jason a chance to have some of those conversations again — now that chit chat is recorded for an audience. Sometimes, the interviews are the building blocks of a story for the magazine or Entrepreneur’s website.

But for Jason, the value of podcasting goes even further. Jason is shopping book deals based on the content of Pessimists Archive. His co-host on Hush Money has experience with the world of television and Jason already has some TV development deals resulting from the podcast.

All in all, Jason sees massive ROI from his podcasting efforts, but he couldn’t have imagined them when he was just starting out. “My philosophy on pretty much everything is: Do it for the experience, figure out the ROI later,” he says.

While there’s no formula for calculating the value to be gained from a podcast. Jason believes it comes down to podcasting’s superior ability to build connection with listeners. It can take a while, though.

Creating a media brand is “a really slow build and it can be really frustrating, but what you're building is a relationship,” Jason says. “It enables you to communicate brand value and a message of what you stand for and how you fit into people's lives ... it goes beyond the individual product that you sell or service that you sell.”

Entrepreneur has produced its digital and print publications for decades and the readership for those dwarfs the podcast listenership (which has been around for just a few years). Though the number of listeners are smaller in comparison, they’re passionate about the brand and are more likely to support the company by donating money or attending live shows.

Ultimately, podcasts are about offering value and telling stories in different ways: “It's important to engage with audiences, wherever they are,” Jason says.

💥 What he does: Editor-in-Chief of Entrepreneur magazine. Jason also hosts the Pessimists Archive, Hush Money and Entrepreneur’s Problem Solvers podcasts.

🧠 Get smart: “The thing about media — the thing about doing it right — is that it's a really slow build and it can be really frustrating. But what you're building is a relationship, and that is so much stickier.”

Give yourself a three-month content runway 👉 A producer Jason hired to help develop Problem Solvers advised him to create three months worth of material before launching the show. Then ideally, keep it up and have a bunch of content waiting to be published. “That was brilliant,” says Jason, who acknowledges that maintaining the kind of runway isn’t easy.

Use your podcast to create content for other platforms 👉 Jason knows that podcast conversations can lead to lots of different types of content. For Problem Solvers, he never promises interviewees that they’ll end up in Entrepreneur magazine, but he’s often to take parts of a podcast interview and include it in a story. Other interviews make for great social content. For example, Jason will sometimes shoot a quick video relaying a piece of advice or information from an episode. “I'm just doing a direct to camera and I put it on LinkedIn. It will be watched 6,000 times — it's not bad for four minutes of additional work on something that I already did,” he notes.

There’s no overnight success in podcasting 👉 You don't need the fanciest equipment to get started on your podcast, Jason says. That's a good thing, because it means anyone can launch a podcast. But as Jason says, “the barrier to success is high.” That doesn’t mean you shouldn’t try to build an audience for your show, but it takes hard work, creativity and a whole lot of patience.

Start a podcast first, then figure out the business model.

"It's hard to make the business case that podcasting is going to be a core part of the business. … The business side really saw it as an additional offering … The sponsors that we work with are interested in podcasting. It's not their core interest, obviously because they're coming to us for partnerships in all sorts of other ways, be it print or digital, but you know, they're interested in podcasting and we're aware that our audience is our podcast listeners and we felt like that's a space that we should play in. We should see how it evolves."

How a podcast episode turns into a magazine article.

"[Podcasting] creates additional means of engagement. It creates new opportunities to speak to people and develop content. I found a little, a lot of synergies in the way, in which, for example, we all report something out for the podcast first. And then I'll say, 'Hey, you know what, actually, this makes her a pretty good magazine story or something like that.' And then it'll move over. So I'm able to get more mileage out of that individual work."

How Entrepreneur magazine's podcast got its scrappy start.

"We're very, very scrappy. We're very entrepreneurial true to the name. And so we don't have, you know, we don't have big investors … And so I said, Why don't I start? Why don't I sit down? Just figure it out. Come up with a show. Let's see if we like it. And everyone said great. … I thought, Well, who can be a good test subject for me? And a guy I grew up with has a really interesting company and I had happened to just recently have lunch with him and heard about this new stuff that's going on. And I, so I called him up and I said, 'Jaron, can I interview you for this?' … And he said, sure."

Revenue is important (even for creatives who hate numbers).

"The first ROI … really is revenue. I mean, this is a media company. And if you're doing something and it's not making money, then it's a drain of resources. ... so I'm happy that it's making money because to me that validates our audio experiments and enables us to go deeper into them. So that's good for me, but then my perspective on editorial. Is that I see it as a great opportunity to get more stories."

Podcasting can lead to opportunities you might not anticipate.

"I have the Pessimists Archive leading to this book and a bunch of other things that are lined up for it. That wouldn't have crossed my mind when I launched that show in 2016, but creating it and putting it out into the world, enabled the stuff that I'm working on now. And so I just do now, rationalize later."

Podcast listeners are the most passionate members of your tribe.

"There were many years where I was obsessive really listening to Slate podcasts ... even though, frankly, I had stopped reading Slate because I didn't have time anymore. ... And so I had time on the subway going home or whatever, or washing dishes where I would be listening to these podcasts. And so you might think, Oh, what the hell does that get Slate? … We were willing to go to live shows to see these podcast hosts [and pay] for Slate Plus … We were paying way more money to Slate than we ever would have if we had just been like regular readers of Slate."

[15:44] "I love creating things, throwing them out. I always think of myself as the center of a constellation of random things. And my job is to figure out: how those things can connect at the moment in which they're going to connect?"

[18:56] "People don't care on an individual podcast or episode basis or article basis. it's an accumulation over time and it's slow. I can't stress that enough: It's slow. And you have to have patience with it."

[21:29] "When you think about your own consumption habits as a podcast listener, you develop a relationship with the host. You feel like, you know them, they're in your ear. It's an intimate exchange … and I think people connect with people a lot more than they connect with brands."

[24:21] "I think that you have to approach it in a multi-platform way. And the reason for that is because your audience is all over the place, their consumption habits are going to be vast and different. And also if you limit yourself to one form, then you're really actually giving up."

[28:14] "It doesn't take tons of resources. If you've got somebody who's passionate about podcasting and is willing to put it themselves to create something that feels unique and valuable to an audience … then you can get out there … and you can do it without really creating much of a drain on your resources."