Rand is a legend in the SEO world, a brilliant marketing mind, and the founder of SparkToro. Learn how he thinks about the value of podcasting, and how SparkToro has grown through it. 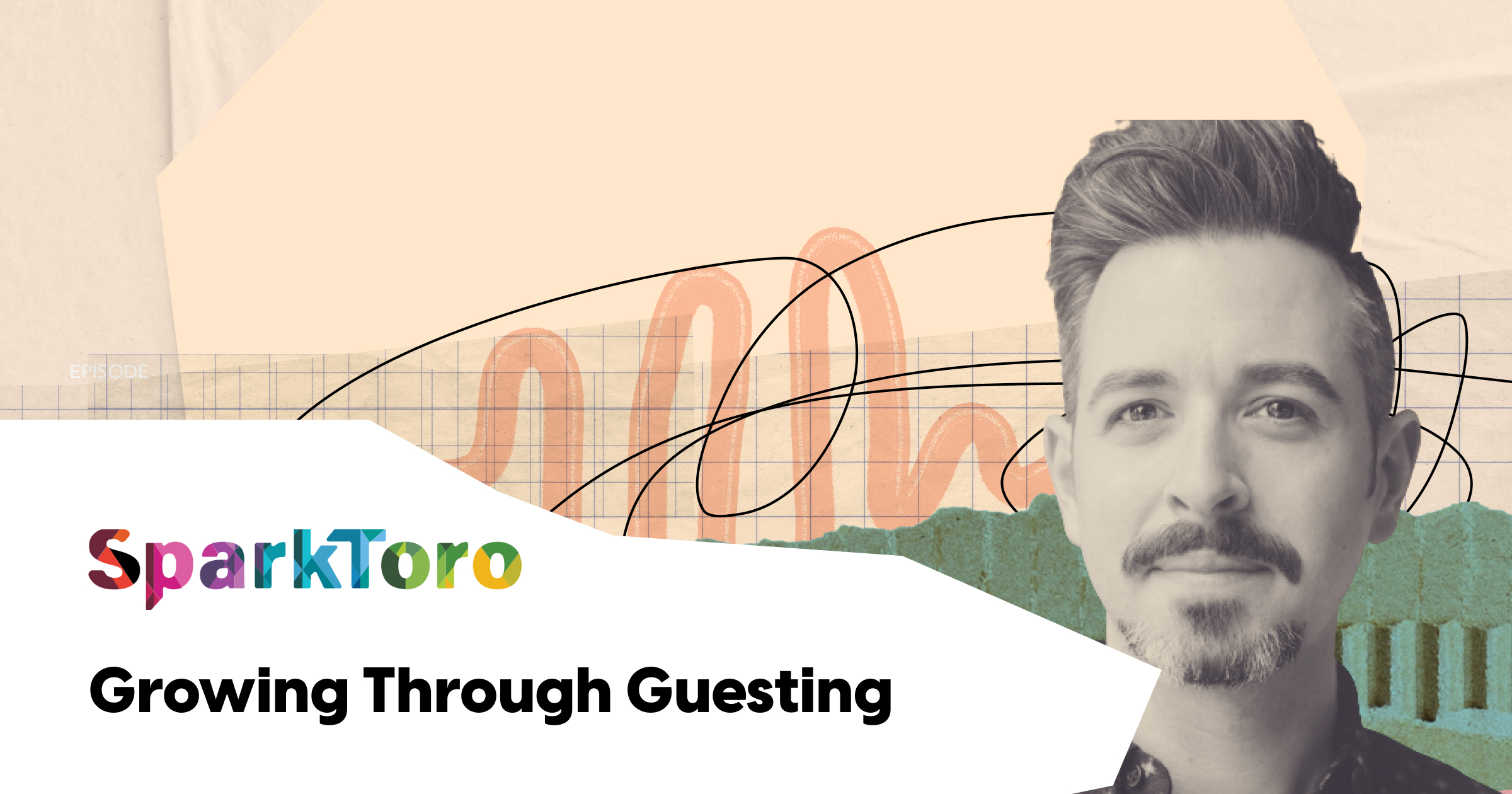 Rand Fishkin knows what it takes to build an audience.

“I blogged five nights a week for the first five or six years of my professional career in SEO,” Rand says of building up a community for what eventually became Moz, the SEO software company he co-founded with his mom.

Rand is onto a new chapter as the co-founder and CEO of SparkToro, a tool to help you discover what your audience reads, watches, listens-to, and follows.

Brand building is a significant part of the marketing strategy for SparkToro, and podcasting —  specifically being a guest on other podcasts — is front-and-center. Rand is doing two or three podcasts each week to “get folks to know who we are,” he says in this episode of Brands That Podcast.

It’s what Rand calls a “participatory” approach to content creation. While he’s got strong roots in content marketing, he sees podcasting as a powerful way to market a new brand.

“I am a huge believer in the idea that podcasts uniquely — and video to a certain extent — form a more meaningful connection with the people who listen and watch versus people who might read a blog post,” he says. When you listen to a podcast, “the degree to which you form a real sense of who the person is and what they're like, and whether they are someone whose work you want to support and amplify is just so much greater.”

In the episode, Rand outlines the value of going on other people’s podcasts (and why it’s still worth it even if the audience isn’t large), his approach to successfully pitching podcast hosts and why he’s a big believer in episodic content and the advantage it has over traditional content marketing.

💥 What he does: CEO and co-founder of SparkToro. He was formerly co-founder and CEO of Moz, co-founder of Inbound.org, and author of “Lost and Founder: A Painfully Honest Field Guide to the Startup World.”

🧠 Get smart: “If I've learned anything over the last 20 years, it's that a ton of what turns into … ‘positive life outcomes’ comes from relationship building.”

Use Google Trends to reverse engineer podcast attribution 👉 Often a listener will hear about your brand on a podcast and then type it into Google or enter your URL directly in the browser. That visit will appear as SEO or direct in analytics. “That’s false! That’s totally fake,” Rand says.

He suggests using Google Trends (which lets you search hour by hour) to help determine how a podcast performed. Dig into the data, consider when the podcast episode was published, and you’ll be able to put together a more sophisticated picture than what you’d see in analytics alone.

Podcasts create “serendipitous” connections 👉 Paying attention to whether a podcast “converts” listeners can be helpful, but Rand stresses that the value in podcasting is in the connection it sparks — particularly the unexpected ones.

Rand offers a hypothetical example: Over a few months, 50 people might try SparToro based on a single podcast appearance. Perhaps none of them end up buying the product, but Rand makes a connection as a result of being on that podcast, which turns into something helpful or positive down the road. “I am happy to do a bunch of serendipitous conversations that create goodwill and relationship building and meaningful conversation. And if folks love listening to it, that's awesome too,” he says.

Want to be a guest on your favorite podcast? Comment 👉 “One of the most effective ways that I've found [to get on podcasts] is to listen to other people's podcasts and then comment on them,” says Rand. “Especially on Twitter, super effective.” Rand says that if you mention a show on Twitter, the host appreciates it and will often acknowledge your comment. In your reply, you can offer yourself as a guest. Rand says he shares his email address and invites the host to email him if they need help in the future. “Boom. I get an email — not always — but very frequently within a few weeks, I get an email from that person,” he says.

Speakers have a natural advantage for podcast guesting.

“I have a significant amount of experience speaking on stages, and that translated reasonably well to doing podcasts without a lot of discomfort. I don't get too nervous about it. I can explain myself moderately well. I'm not the best podcast guest in the world, but I'm not the worst.”

“When I'm on podcasts — even when I'm not talking about what SparkToro does in particular — people search it out. And you can see that — you can go to Google Trends, you can look at the data, you can see when a podcast episode is published. You can see the search trends and spikes from that podcast for the brand that was mentioned or the person that was talked to. It's cool.”

“An obviously huge qualitative reason that I do podcasts is because I get to build real connections, friends with people, right? So you and I, we can't meet in person, right? It's not just COVID. We are also geographically distributed and I work from home and maybe we could get together for a lunch or coffee someday or whatever … this lets us have a really meaningful connection and experience with each other.”

Why podcasts beat blog posts when it comes to relationship building.

“I also am a huge believer in the idea that podcasts uniquely — and video to a certain extent — form a more meaningful connection with the people who listen and watch versus people who might read a blog post. Right? So if you read a blog post from me or on SparkToro, you might be like, oh yeah, I like that. … I learned something. … But if you are listening to this conversation or another podcast that I'm on — the degree to which you form a real sense of who the person is and what they're like, and whether they are someone whose work you want to support and amplify is just so much greater.”

“A lot of marketing channels require individual outreach and relationship building and work to reach a relatively small, but potentially very valuable audience, and so most big businesses ignore them and just throw money at Google and Facebook … that leaves these other smaller channels and individual tactics with huge ROI and low competition, but you can't get the same scale. That is where I think the savviest and the best marketers are making their investments and helping to build small and medium businesses in awareness and in brand and in driving high-quality traffic.”

You can’t promote all the things.

“I am super picky about what I amplify. … I think in the last six months, you've maybe seen me promote, I don't know, two podcasts a month. So not even all the ones I'm on. And that's because I'm very picky about the way that my social channels and my feed is consumed and it has to be high quality. It has to be endorsable. And so when that endorsement happens, I want it to be genuine. It has to be genuine.”

When they can’t get enough of you, make sure they have a library of content.

“I am a huge believer in episodic content. So producing consistently similar formats with a consistently similar voice in a way that resonates with people and that gets better and better over time. Sort of like episodic television … those networks [Netflix, Hulu] are building fans, not just audiences. And that I think is a superpower in the marketing world in particular. And that episodic content could be podcast. It could be a video series, it could be a blog. It could be an email newsletter.”

[16:39] “If I've learned anything over the last 20 years, it's that a ton of what turns into … ‘positive life outcomes’ comes from relationship building.”

[30:52] “I don't know if this is right for everyone, but I don't reach out and say, Hey, are you looking for a guest on your podcast? I think I probably could, but instead I wait for them to kind of come to me. And that has worked really well.”

[41:47] “The attribution is going to be really challenging, but I'm recognizing that marketing is multi-touch, knowing that and then making investments accordingly. That's powerful.”

[47:39] “So you get these multitude of benefits from episodic content that I think doesn't come from classic one-off content marketing. Let me write a blog post or a news article or whatever to try and target this keyword. I don't think that works in the same way.”