Wistia are content marketing pros. And while they’ve created a lot of videos (shocker) they’re now leaning heavily into podcasting. Learn how they use content to grow their brand, and think about measurement, ROI and more. 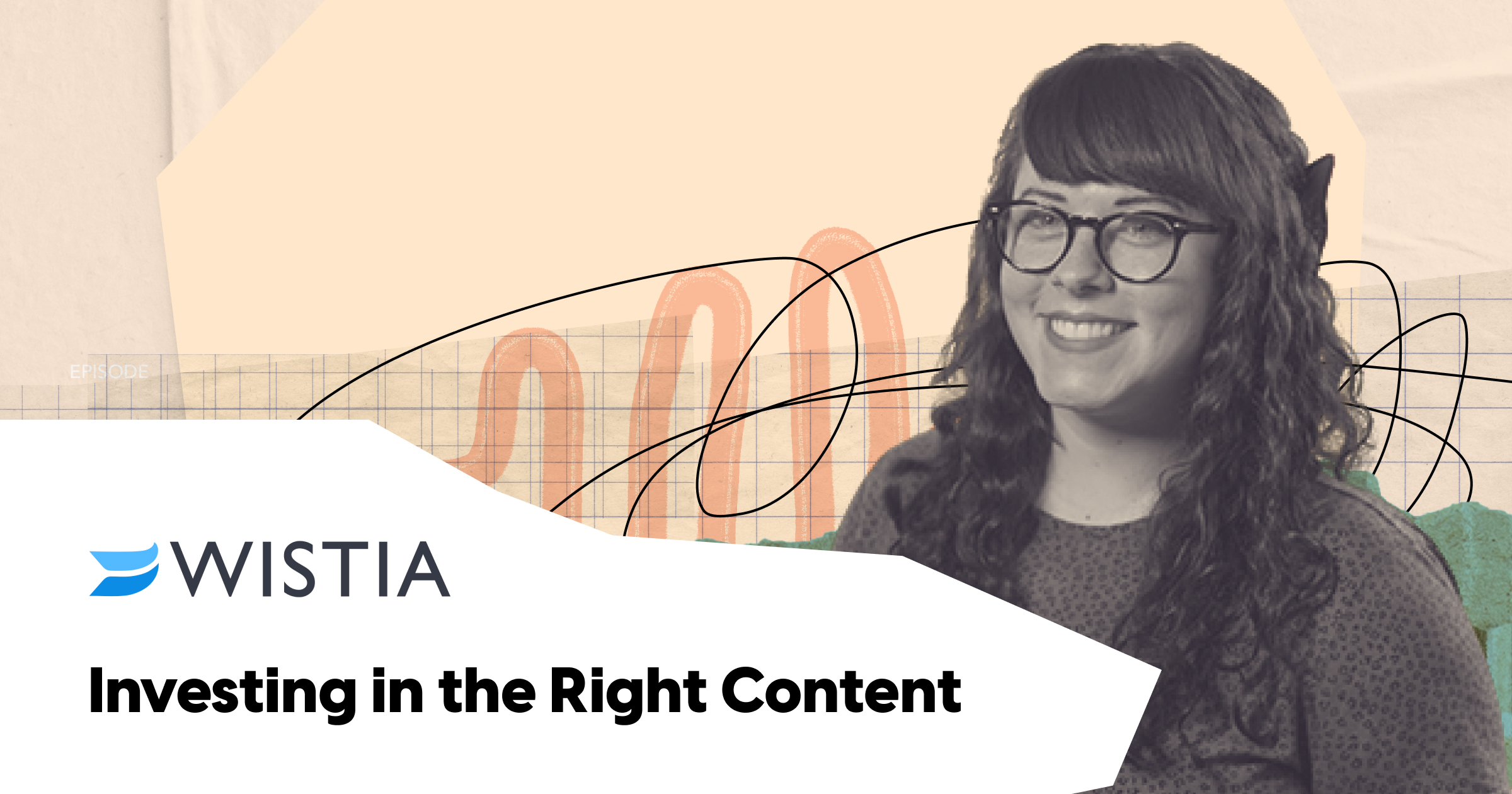 For video software company Wistia, which has more than half a million businesses using its product, growth comes down to brand marketing.

The 120-employee company, which has been around almost 13 years, leverages video series — and more recently podcasts — as a centerpiece of its marketing efforts.

“We have our CEO running a show. I have one in the works. One of my colleagues on our people team has one in the works,” says Jenny Coppola, Wistia’s Director of Creative and Content.

Over the years, Wistia has tried a range of marketing approaches. When reflecting on what had the most impact, brand was the clear winner. Armed with that realization, the company launched the video series One, Ten, One Hundred.

The traction was undeniable and the company has built up its audio and video offerings from there. Today, there’s a Wistia Studios team responsible for creating videos and podcasts. Wistia even has a devoted development producer whose job is to come up with creative ideas for podcast and video content. “I don't think every company needs a development producer, but when we're investing so much in long form content, it makes sense,” Jenny says. Wistia Studios also has a lead producer who oversees podcast work.

In the episode, Jenny explains why investing in brand makes sense, why focusing exclusively on numbers could be inhibiting your most creative ideas, and how the Wistia team measures the success of its content (hint: they care a lot about how much time people are spending with it).

💥 What she does: Director of Creative and Content at Wistia. She oversees content marketing at a high level and the social strategy for Wistia. Being a hybrid role, she also manages their copywriters and works closely with designers and video producers.

🧠 Get smart: “I think the leaders of marketing teams should get on board and believe in investing in brands, in letting their team take more creative risks.”

Have humans interpret how things are going 👉 There are so many tools available to track how your content is doing, but don’t rely on automated reports exclusively — analysis is key.  Jenny says, “I think a big part of it is having a human being interpreting it versus just pumping out a report that has impressions, clicks, whatever the cost per click.” Marketers should be able to create a meaningful picture of all the data that helps them understand whether or not they should keep investing in it.

Develop the content first, then decide on a format 👉 Should your podcast be a limited series or ongoing episodes? Jenny says the Wistia team is constantly asking this question. “I think our answer always comes down to, the format should come after you know what you want to talk about.” There are different advantages when it comes to episodic content versus a short series that can be released all at once. But Jenny points out that ongoing content can be helpful for promotion. “It does give you more of a runway for building an audience,” she says.

‘Build, borrow or buy’ 👉 For companies that want to get started on a video series or podcast, it can be difficult to know where to start and how many resources you’re going to need to put into it. Jenny has a unique framework for this. “We call it build, borrow or buy,” she explains. The foundation of your team could be in-house social media and content people. Making a podcast is not dissimilar from creating a blog post, Jenny says. “It's the same muscle that you're flexing, it's just a different format.” Borrow refers to leaning on freelancers and contractors to help you scale. Alternatively, you can “buy” and work with an agency to create the content for you. “It all depends on what resources and time you have available to you to put into creating this content,” she says.

“It does give you more of a runway for building an audience in that, over time, as more people slowly start hearing about your show, they can recommend it to their friends. Then you can scale that way. You do run the risk a little bit with one series of a show, you might make a big splash at the beginning and you might see a bigger peak or a bigger spike right when it comes out but then it has a bigger drop-off.”

On demand is a powerful way for people to engage with your content.

“I think the fact that podcasts are on demand is huge and I think is going to play a really big role in its success. The fact that you can really cater to your audience's preferences in that way, and video is amazing for storytelling but I think being able to tune into a podcast whenever you want is a pretty powerful way for people to engage with your content.”

“I feel like a good way of repurposing the content in a way that wasn't just the audio stripped right from the video, it was like, okay, we have all this stuff, let's make it into, let's suit it for the format and make long form interview podcasts.”

Do something weird — it’s great PR.

“If you want to be able to really gauge how your audience is feeling about your content, do something weird to promote it. So do a direct mail campaign! For one of our video series, we actually rented out a movie theater and we played the whole docu series there. We invited people in the local community who were customers, we invited people who've worked with the company. So that was really fun. And we did a whole screening there and that's not exactly hard and fast ROI, like, but you build a sense of community there.”

Give your customers something to keep them caring about your company.

“That's just another way to make a really great brand touch with your customers and prove to them we're not only giving you the software service but you're also getting XYZ. You're getting all this content and you're learning how you can actually do your job better or get inspired to do something within your own career. I think it's definitely a bonus and it's just a great brand touch as well.”

Nothing beats a proof of concept.

“When it comes to pitching to your boss and getting buy in on this idea, I think nothing is better than making a proof of concept. Even if it's not super polished. Do your background, homework and show other companies that are in your space that have a podcast or a video series, and kind of prove the point. ”

[06:36] “So we kind of realized, okay, what, what helped us grow initially? What is it that really helped Wistia grow? And when we thought about it, we were like, it's always been the brand. That's been the thing that's worked for us.”

[13:30] “I just think people need to lean on what their gut feel is a little bit more and not just be so bogged down by the numbers. You know, this number to me means something different to you in a different platform and it's just kind of unreliable”

[23:17] “I don't think there's one formula to understand if your show is succeeding or failing — but if you get a lot of qualitative feedback from your audience about how much they like it — I think that's a good sign that it's worth the investment.”

[51:52] “They said that over and over again, they love being able to tune in whenever, like in between a meeting or doing laundry or, you know, walking your dog or whatever. They just absolutely love being able to be in control of when they got to consume the content.”

[54:31] “Basically just do your background homework, show other companies that are in your space that have a podcast or a video series, and kind of prove the point. Like people are already doing this, so get in now while it's early. Show that there's a demand for this and that people want this type of content.”